What do you mean we are running out of sand? Although the importance of water as a resource is well accepted, fewer people know that sand is the second most consumed resource globally.

Why is sand so important?

Sand is a crucial natural resource for any country, used in a wide range of industries and is the core ingredient of materials used for construction such as concrete, glass and asphalt. Sand acts as the binding agent used in concrete and is melted down to create glass.

But not just any sand will do. Only angular sand with jagged edges can be used for construction. It is found in lakes, banks and floodplains of rivers, and in the ocean. Desert sand cannot be used in most products because it is eroded by the wind, making the grains rounded and smooth, and therefore unable to effectively bind together.

What is driving the global demand for sand to inconceivable levels?  Urbanisation — 70% of the world’s population is estimated to live in structures made primarily from sand. Mass urbanisation is especially apparent in growing economies such as India, which is ground zero for the global sand crisis. In India, a construction boom is fuelling the need for sand to a level that cannot be sustained without immense damage to the environment, ecosystems, and people.

Demand for sand is also driven by the need to maintain existing infrastructure. Concrete’s lifespan is 50 to 100 years and approximately 100 billion tons of concrete within dams, bridges and buildings in the United States alone will need to be replaced in the coming decades.

It is unsurprising then, that sand mining is a big business. The amount of construction sand used annually has tripled since 2000 and continues to grow. The United Nations Development Programme estimates that 85% of all mining activity in the world falls under sand or gravel. Globally, 50 billion tons of sand is extracted every year. This overconsumption is leading the world to a global sand shortage.

What are the consequences of sand mining?

Sand mining takes a huge environmental toll, with knock-on effects for local communities. Riverbanks and beaches are being stripped bare, causing fresh water to salinate and impact local wildlife. In Sri Lanka, sand mining reversed the flow of a river and caused ocean water to head inland. The salination of groundwater then threatens livelihoods by impacting food production and limiting access to drinking water for people around the world.

The immediate need for sand for the construction industry has trumped concern for long-term environmental damage. With the absence of global monitoring of sand extraction, the environmental effects remained largely unknown until the late 2000s. Although now, there is more understanding and increased regulation of mining in the Global North, monitoring sand extraction is incredibly difficult, especially when done illegally. 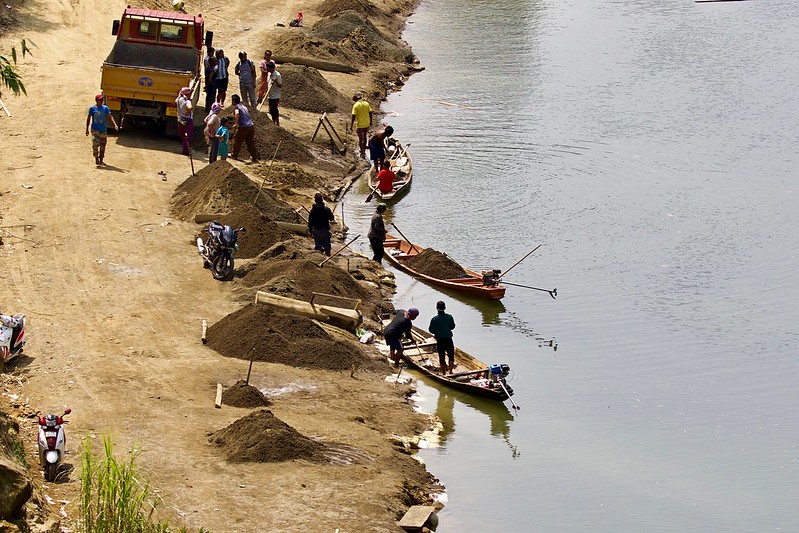 Illegal sand mining demonstrates how the sand shortage has created social, and environmental problems. Organised crime groups have arisen throughout the world to supply the construction industry’s insatiable demand for sand. In India, the sand mafia is one of the most widespread, violent and impenetrable organised crime groups throughout the country. Mining has become more aggressive and dangerous, amplifying environmental damage and posing increased risk to those mining sand, and those who oppose it. Hundreds of people have been killed in recent years, including police officers, journalists and civilians.

Do we mine sand in New Zealand?

This year, Auckland Council rejected the McCallum Bros application to dredge 2 million cubic metres of sand over the next 35 years off the coast of Pakiri beach, near Mangawhai in New Zealand’s Northland. This ruling came after decades of public pressure from community groups to halt sand mining at Pakiri beach altogether following nearly 100 years of extraction. Sand from the area has comprised almost half of Auckland’s sand supply, used in large-scale projects such as the Sky Tower and the Auckland Museum.

Sand mining has caused immense, irreversible damage to the coastline in Pakiri beach, with negative impacts on marine and bird life. Pakiri’s dunes are home to Aotearoa’s most endangered native bird, the tara iti (fairy tern), with fewer than 40 remaining in the world. Sand acts as a shield between land and water, offering protection against storm surges and sea level rise. It can take millions of years of erosion for particles to transform from rock to sand and gradually make their way through rivers towards the ocean. Nearshore sand mining has advanced erosion on the shoreline of Pakiri beach, with no new sand to replenish what has been taken.

However, accessing sand remains central to some of the biggest challenges facing Aotearoa today, such as the housing crisis. Building more houses has been at the forefront of the political agenda for many years, with the Labour government introducing the $3.8 billion Housing Acceleration Fund to push for more houses to be built. In 2021 alone, 48,899 new homes gained consent to be built. Many of these builds have faced significant delays due to material shortages and supply chain issues. This has resulted in significant inflation of supplies, with prices rising as much as 20% for many materials.

Alternatively, New Zealand could import sand, as it has done with phosphate mining. However, this faces the same issue of relocating damage and increases emissions from transportation even further. Off-shoring the social and environmental consequences of sand mining also contributes to a global appetite for sand which is disproportionately felt in developing countries.

Can we avoid running out of sand without damaging environments and communities?

One barrier to reducing sand mining is the lack of a large-scale, accessible and affordable alternative to sand. Although there is a growing awareness that sand is running out, mining continues because sand is cheap and accessible.

Technological fixes are being explored. Finite sand uses a new binder which can bind wind-eroded, desert sand. This method offers benefits including a production process with half the carbon footprint of concrete. At the same time, these solutions face many barriers, including price and accessibility.

It is also worth considering whether mass sand mining can ever be truly sustainable. Even a fix like finite sand would require large scale resource extraction to meet global demands. Alternatively, researchers from Leiden University have argued that a crisis could be averted using material efficiency strategies such as increasing building lifetimes, recycling concrete, using lighter materials where possible, and designing buildings which require less concrete. As long as the sand shortage is fuelled by the demands of large-scale production and inefficient construction practices, there will continue to be an appetite for “cheap and easy” solutions and barriers on firmer regulation.

Annalise O’Sullivan Moffat is a postgraduate student in Development Studies at the University of Auckland.

West Papuan campaigners want a ‘green state’. Could it help the planet?