Why is the UN calling for a gendered approach to climate – and how does Aotearoa stack up?

By Bex Ansell and Izzy Renton

She asked for all countries to:

Why does gender justice matter for climate justice? Crises such as climate change exacerbate existing inequalities across gender, race, age, sexuality, etc. Women are overrepresented in the global poor and face social expectations that leave them more vulnerable to the impacts of climate change and climate-related disasters. Women are more likely to be displaced by climate change, suffer from pollution-related health problems, lose income following climate disasters, and shoulder the burden of recuperation efforts. Women and children are 14 times more likely to die or be harmed when climate-related disasters strike, and in the aftermath, face increased victimisation to violence. The impacts on women go on to affect their children, families, communities and local economies. 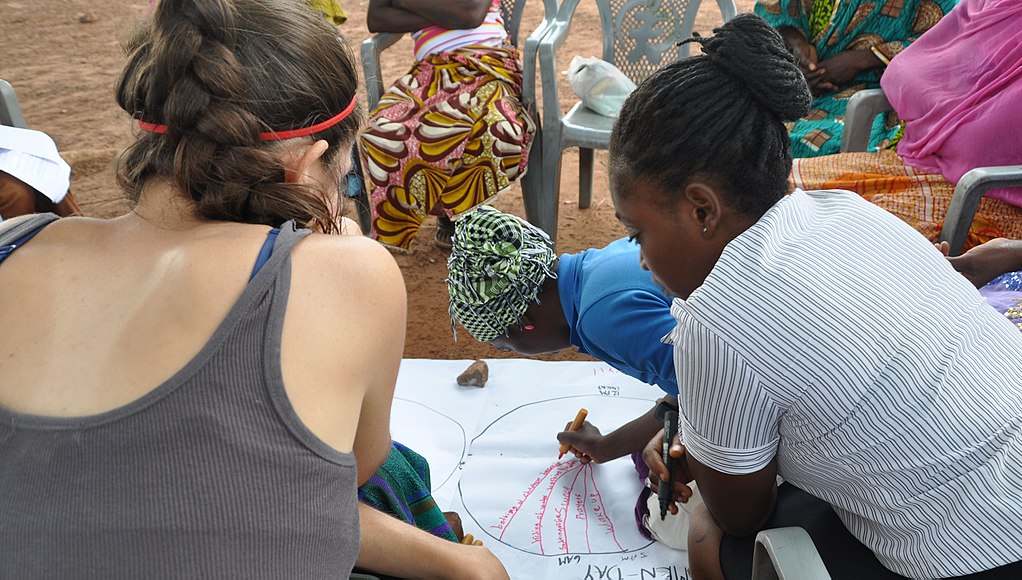 Women discuss the gendered impacts of climate change in Ghana. By CARE-CCFS, Wikimedia

This relationship also works in the reverse. The evidence shows that when gender inequality is high, environmental degradation, including forest depletion and air pollution, is more likely. A gender-balanced society is better able to confront climate change, and yet, globally, women are 132 years away from achieving full equality with men. This rate of change is too slow to address the real-time impacts of climate change. So what is Aotearoa New Zealand doing to address the intersection between climate and gender, and how do we stack up to Sima Bahous’s three asks?

Equal participation in decision-making and equal control of resources

Countries with more women in politics are more likely to ratify international environmental treaties, reserve protected land areas, and reduce carbon dioxide emissions. In Aotearoa, women currently make up 48% of Parliament. We are one of the few countries in the world to have had three female Prime Ministers. At the same time, female leaders still attract gender-normative commentary about their age, appearance, and the state of their fertility. Such limiting gender stereotyping led The Guardian to create a montage of sexist questions put to Jacinda Ardern, covering topics ranging from her hair to the conception of her child.

Identifying environmental conservation as a quality of women leaders also risks essentialising behaviour along constructed gender binaries and may overemphasise the impact of individual women in male-dominated sectors. The realities of Labour’s climate action under Ardern have been more complex than a woman leader promoting climate action. On the one hand, Ardern’s government have been the first internationally to propose taxing farmers for agricultural emissions. On the other, Labour’s 2020 climate emergency declaration was criticised for doing little to address New Zealand’s poor track record and flawed emissions targets.

Significantly, while women make up over 50% of public sector boards, the private sector is letting New Zealand down on both gender equality and climate. At NZX’s 100 top-rated companies, women make up just 4% of CEOs and 19% of senior management. While countries including the UK, Australia, France, Spain, Sweden, and South Africa have brought in legislated mandatory gender reporting for large companies, just a handful of New Zealand companies voluntarily report their figures. Equileap’s 2022 global corporate gender equity survey (ranking the top-performing 100 companies on gender) features only one New Zealand company, Xero, in 83rd place. Given New Zealand’s largest industry is agriculture – contributing 70% of merchandise for international export and creating 50% of New Zealand’s gross emissions – equal participation in decision-making will rely on increasing women’s leadership in the private as well as the public sector.

Many of the drivers of women’s increased vulnerability to climate change are due to economic discrimination and social norms around gender roles. Despite being ranked 4th globally for gender equality by the World Population Review, women in New Zealand continue to face discrimination both economically and socially. On average, men continue to earn 10% more than women in New Zealand, contributing to a 20% savings gap between men and women at retirement. Due to social norms around care and its value, over 200,000 New Zealand women work 30 hours per week as unpaid carers. This means that while 35% of work performed by men is unpaid, a whopping 63% of work performed by women goes unpaid. The value of New Zealand’s unpaid care work is estimated at $10.8 billion, or 5% of GDP, demonstrating that New Zealand is a long way off from achieving a care economy  – an economy that values care and rebalances paid and unpaid work responsibilities.

These factors contribute to gendered outcomes in New Zealand’s crises. Domestic violence increased during the Covid pandemic and following the Christchurch Earthquake. In both cases, important services relating to gender were negatively impacted. During the pandemic, women shouldered the burden of care during childcare and school closures, while women’s refuge facilities were destroyed by the Christchurch earthquake. 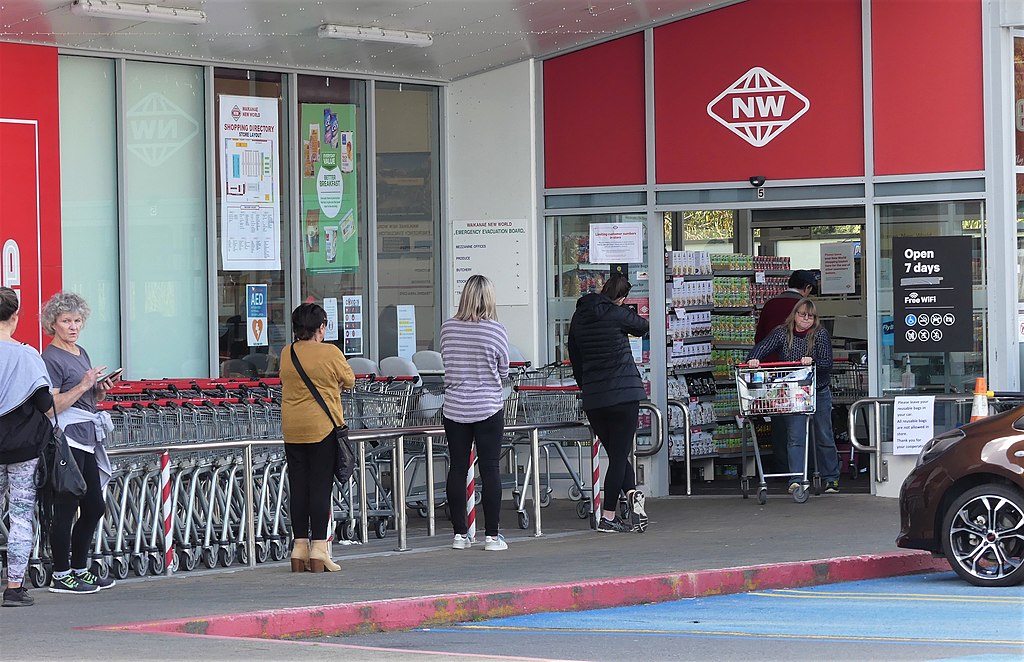 Women maintain social distancing while queuing for the supermarket during Covid-19. By Alan Tennyson, Wikimedia

That gendered analysis of crises exists, demonstrates how gender has become a consideration, at least in the public sphere. However, there are not yet clear answers about how climate intersects with gender in New Zealand. Furthermore, existing crisis analysis does not always result in a gender-sensitive response. In post-earthquake Christchurch, and nationwide during the pandemic, women’s employment decreased and received less focus in government recovery programmes. Despite women representing 90% of pandemic-related job losses in the 2020 June quarter, the government continued with a shovel-ready response that favoured the male-dominated construction industry. This is despite the fact that care sectors addressing social, physical and mental health outcomes, and with high female representation, are relevant to disaster recovery.

Investing in women’s skills and the removal of critical barriers

The Feminist Green New Deal noted that “the wealthy can buy themselves out of the climate crisis, the poor cannot. While women remain poorer, we remain more vulnerable to crisis, and less adaptable to the climate crisis.” Preventing gender inequality from compounding with the impacts of climate change requires that investment goes towards women’s skills and allows for equal access to opportunities across education, work, finance, and technology.

Barriers to work due to care responsibilities and discrimination are well documented by efforts surrounding the gender pay gap. However, it remains difficult to assess the level of investment in women’s skills in New Zealand. While investment in tertiary education favours women, who represent 59.5% of students, this has not resolved gendered barriers to work. Recently, women’s sport saw increased state investment. But little evidence exists showing what proportion of New Zealand loans and investments go to women and women-led businesses. A failure to effectively measure investment in women and their skills suggests that the scale of this challenge is not even understood, let alone acted upon.

New Zealand led the world in giving women the vote, could we become the first country to achieve gender equality and take a holistic approach to gender and climate? There is much to do to shift our gender balance, not only between Pākehā men and women, but particularly for Māori and Pacific men and women. Furthermore, any gendered approach must consider how sexuality or non-binary gender identity can compound with traditional gender inequalities.

How does COP27’s loss and damage deal really look to the Global South?